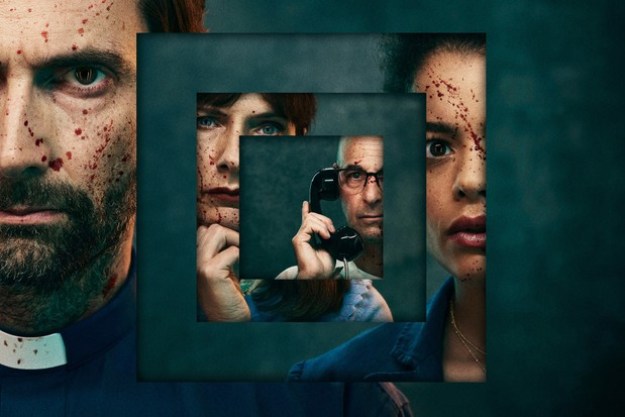 “Even with an overstuffed plot, Inside Man is well-worth a quick Sunday afternoon binge.”

The latest offering from showrunner Steven Moffat (Sherlock, Doctor Who) features a brilliant cast,a  pitch-black comedic tone, and a compulsively bingeable, if flawed story. It’s less serious than Ryan Murphy’s grim Dahmer and more satisfying than Murphy’s other 2022 hit Netflix show The Watcher. Yet even as the airport novel plotting falls apart at the seams, the skill of the talent involved carries this four-episode miniseries over the finish line.

A priest and a serial killer walk into a bar …

The star of the show is undoubtedly Stanley Tucci as Jefferson Grieff, a delectably suave and intelligent man who just happens to be awaiting execution for strangling and dismembering his wife. Grieff, alongside sociopathic serial killer Dillon Kempton (Atkins Estimond), has established a wisecracking crime-solving partnership à la Sherlock and Watson, with the kicker being that their desperate clients have to schlep out to maximum-security prison instead of a traditional detective’s office to approach them.

Watching this odd couple solve mysteries in the most unorthodox of ways is wildly entertaining and lends itself to its own spinoff series. However, this storyline is just one of the many threads going on in a jam-packed narrative.

We must also contend with the story of Harry Watling (David Tennant), the jovial vicar of a quaint British village who, due to some bad luck and extraordinarily stupid decisions, finds himself stuck in a situation that could ruin the life of his family and himself. Tennant, very familiar with Moffat from his stint as the titular Dr. Who, embodies his role with his signature blend of dry wit, charm, and madness lurking just below the surface. In order to protect Edgar, a troubled, suicidal man working at his church, Harry takes a flash drive with some unsavory content (he later finds out that it’s child pornography) off his hands, and it mistakenly ends up with his son’s math tutor, Janice (Dolly Wells).

In trying to assure her the flash drive doesn’t belong to his son, and in trying to protect Edgar, Harry takes the interesting course of action of locking Janice in his basement until he can decide what to do. Unable to convince Janice that it doesn’t belong to anyone in the family, and unable to be convinced that she won’t run straight to the police if freed, Harry digs a hole for himself –and all we can do as an audience is watch his painful decision-making.

Torn between his moral duties because he’s a vicar and his desire to protect his family, he is stuck in constant negotiation with Edgar, Janice, and his wife, Mary (Lyndsey Marshal), who copes with the hostage situation by drinking liquor and googling how to successfully murder someone. The tension builds thrillingly, with Harry getting further and further sucked into his own mistakes, but never does the show properly address how he was better off turning Edgar in instead of protecting him out of some confused moral posturing. The lad is a pedophile, after all.

Their paths cross when Beth Davenport (Lydia West), an investigative journalist, visits Grieff in prison under the suspicion that her “friend” Janice is missing. Their tenuous connection is established in the first scene of the series, when Beth repeatedly asks Janice for coffee to no avail, but the wheels of the plot are set in motion by Beth suspecting that Janice is in trouble when Janice randomly sends her a blurry photo.

A lack of cohesion

It feels like Moffat is desperate to figure out how to bridge these two separate storylines together, and he uses Beth as a central connector between the two without giving her any real agency in driving the story. Despite her being an investigative journalist, we only see her driven around at the whim of Grieff, as he sends her off to look for clues for his various cases with the help of the shadow army he has working for him across the globe (we needed more of this!). She spends most of the miniseries with a confused look on her face as other characters take action all around her.

Thematically, the linkage between the two stories is clear. Tucci’s version of a murderer is so classy and likable that the audience, and characters themselves, wonder aloud how he could have killed someone so brutally. But as he tells Beth in a calm, seductive voice, “Everyone is a murderer; all it takes is a good reason and a bad day.” That essentially serves as the thesis of the story, and Moffat appropriately cuts from his philosophical musings back to Harry’s desperate, downward spiral.

Good people are driven to do bad things. It does not matter how quickly and illogically those driving forces occur, but Moffat is letting us know it can happen to us, too — even if our mistakes are not as stupid.

A complex show that needed more time to tell its story

Moffat embraces the moral complexity of our everyday lives. The pedophile is tortured by his dark instincts, the vicar is nearly driven to insanity by his desire to be good, and Janice, the supposed hero of the story, is found to be conniving, manipulative, and unlikeable. And Grieff, as charming as he is, is still a murderer, and as much as it is teased, it is never revealed why he kills his wife.

The effect of all of this moral ambiguity is comedic; all of the characters bumble their way through the maze-like crime-thriller plot, and even as extremely dark things are happening, Moffat brings a heavy dose of levity to the proceedings in a way that only he can.

Inside Man is the rare show that would have benefitted from a longer run of episodes, or at least, a more carefully constructed setup. It invites us into a richly realized world, but never fully lives up to its potential due to the necessity of getting  viewers from Point A to Point B as quickly as possible.

After rushing toward its unsatisfying conclusion, it hints at a world beyond the events of these four episodes. It really would be nice to see the death row detectives get a longer television run, although their impending deaths might limit the length of such a show. More focus on what works here could have resulted in something special.

The end result is more along the lines of a microwaveable filet mignon. It still tastes good, it has all the appearance of a gourmet meal, but it does not satisfy in the way that it’s supposed to. It still goes down smooth, and you definitely will not regret eating it, but you might forget that you did pretty soon.

Inside Man is currently streaming on Netflix.