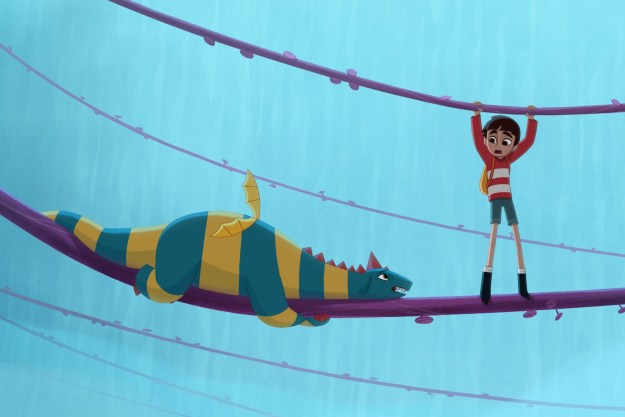 “An excellent cast and strong dramatic moments lift this adaptation of My Father’s Dragon above its simple animation and fuzzy storytelling.”

Beloved children’s stories that haven’t been adapted and re-imagined for the screen many times over are a rarity these days. And yet, Netflix film My Father’s Dragon is the first English-language adaptation of Ruth Stiles Gannett’s award-winning 1948 novel of the same name (following a 1997 Japanese adaptation), and will likely offer some viewers their first introduction to Gannett’s fantastic adventure.

Directed by Oscar-nominated filmmaker Nora Twomey (The Breadwinner) from a screenplay by Meg LeFauve (Inside Out), My Father’s Dragon follows a young boy named Elmer Elevator who runs away from home to a magical island where a dragon named Boris is held captive. While there, he encounters various jungle animals — some helpful, some threatening — as he attempts to free the dragon.

That talented group is put to good use, with Matarazzo particularly well cast as the dragon, whose playful innocence and optimism are channeled wonderfully in the actor’s vocal performance. Tremblay is, as always, a reliably earnest and entertaining young protagonist, while the unique and familiar voices of McShane, Goldberg, and the rest of the supporting cast provide some welcome depth and substance to their characters.

Although the over-arching story in My Father’s Dragon tends to meander a bit and get lost in its cast of colorful characters and fantastic settings, the film delivers some powerful emotional beats. The film manages to feel both incredibly sad and triumphant at times, even when the story and themes connecting those moments remain a bit vague and, at worst, confusing.

It’s unfortunate that the film is a bit of a mess, story-wise, because there are some genuinely touching moments in My Father’s Dragon. And sadly, the film’s relatively simple animation and color palette doesn’t offer the sort of distraction from its flaws that many animated features get away with.

Still, there’s a lot to like about My Father’s Dragon, which offers the sort of imaginative world-building and fantastic concepts that play well to younger audiences and keep them engaged for the long run. Elmer and the dragon are genuinely fun characters and make it easy to get swept away in their adventure.

While it doesn’t offer the bright, flashy spectacle or carefully structured emotional journey of higher-profile animated features these days, My Father’s Dragon does deliver an entertaining experience — particularly for younger viewers. Older audiences are likely to appreciate the film’s impressive voice cast and some of its more potent dramatic beats, but much of My Father’s Dragon seems aimed at the same, young audience as Gannett’s book — a decision that feels both charming and a little quaint in the landscape of modern animated features.