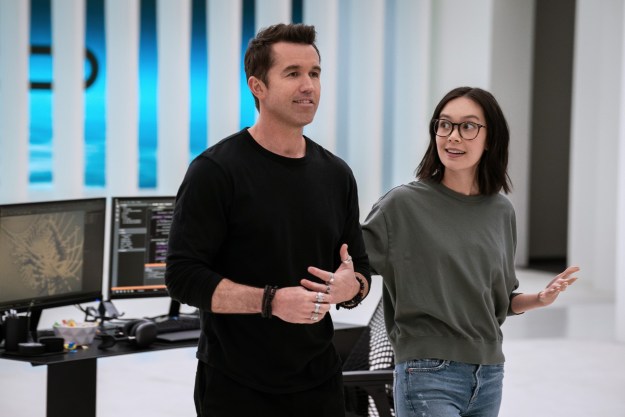 “Although it slips into too-familiar territory now and then, season 3 of Mythic Quest keeps the bar high for the smart, superbly crafted Apple TV+ series.”

Film and television adaptations of video games have always been tricky to pull off, but stories about the people who make the games have enjoyed a much warmer reception. The latest season of the Apple TV+ series Mythic Quest offers a powerful reminder that it remains one of the best of the bunch.

Now returning for its third season, Mythic Quest, which is also the name of the game the series revolves around, builds on the momentum from a second season that could have easily been its last in terms of story. The prior season saw the original, core group of characters effectively broken up, dispersed among new roles, new interests outside the game studio, and even new companies.

And yet, despite all of the big changes that inform this season of Mythic Quest, the show’s third season still feels remarkably familiar in ways both welcome and sometimes, well … a little too familiar.

Season 3 of Mythic Quest finds former Mythic Quest creative directors Ian and Poppy, played by series co-creator Rob McElhenney and Charlotte Nicdao, respectively, attempting to get their new studio off the ground amid personality clashes and creative disagreements. Meanwhile, remaining studio head David (David Hornsby) struggles to maintain momentum for the game Mythic Quest after Ian and Poppy’s departure, with the prospect of a Mythic Quest movie looming over his efforts.

The third season of the series shakes things up significantly, delivering new permutations of characters that showcase their strengths, weaknesses, and the unexpected ways they bounce off each other when occupying a shared story arc. This makes for plenty of fresh comedic opportunities, as well as some fun narrative twists and turns along the way, but it also bolsters some of the show’s underserved characters — particularly Dana and David’s assistant, Jo (Jessie Ennis). That duo, as well as a few other characters that played supporting roles in past seasons, shine in the expanded spotlight season 3 gives them, and it only adds to the show’s appeal.

While the dispersal of characters as the season begins has the potential to stretch it a little thin, the series doesn’t take long to bring the core cast together in one way or another.

Season 3 of Mythic Quest does an excellent job of weaving together the various predicaments the characters find themselves in, and each season of the series has gotten a little better at it. Where the first season of the series often compartmentalized certain characters — the testers, the management team, Ian and Poppy — every subsequent season has blurred the lines a little more between the various groups, and season 3 merges them all together in some unexpected but welcome ways.

While the creative ways the story brings them together in season 3 occasionally stress the plausibility of the show’s central premise — no game studio (or any company, for that matter) could function at a high level with such fluid staffing and roles — all of the mixing and matching allows the show to dive a little deeper into each character. And once you let go of holding the show to any foundation in reality and embrace the surreal chaos of this workplace sitcom, Mythic Quest is just as rewarding and entertaining as ever in its third season.

Still, all of that shuffling of the cast does have its limitations, and the season can feel a bit too familiar at times because of it. The series doesn’t introduce any new lead characters in season 3, even after a major character exits the show, and the season sometimes feels like a game of three-card monte, with characters being shifted around quickly in order to distract from the overarching story’s lack of forward progress. By the time the dust settles at season’s end, the characters are back in their comfort zones again, and all of the craziness of the season-long arc ends up feeling a bit like entertaining-but-empty filler.

One familiar element that’s both welcome and well done in season 3 of Mythic Quest is the now-traditional standalone episode.

The first season of Mythic Quest featured an absolutely phenomenal and emotional one-off episode that broke from the season-long story arc to tell the story of two game designers whose respective love for the medium brought them together, brought them success, and ultimately ended their relationship. It was a beautiful, heartbreaking, and powerful story directed by Rob McElhenney and written by Katie McElhenney that offered a reminder of the power of art in any form to unite and divide us.

Season 2 of Mythic Quest followed that up with a standalone episode exploring the early career of F. Murray Abraham’s character, Mythic Quest‘s hard-drinking head writer C.W. Longbottom, whose disappointments, compromises, and bad decisions led him to become the funny-tragic figure he is in the show.

The third season of Mythic Quest uses its standalone episode to take another deep dive into the early years of two of its major characters. The episode plays out in parallel arcs as two characters on different sides of the world discover their mutual love for video games through very different paths, both sad and wonderful, before coming together to create something bigger than both of them. It’s another powerful, thought-provoking episode that cuts to the heart of the myriad reasons artists are driven to make and create.

Although Mythic Quest season 3 falls into a familiar routine with its characters a little too often, the show’s immensely talented cast and creative team manage to keep things entertaining throughout the 10-episode season. All of the character- and role-shuffling occasionally feels like a distraction from the season’s recycled elements, but it’s a good distraction — the kind that delivers plenty of entertainment even as the story arcs become increasingly familiar.

Ted Lasso might receive the lion’s share of attention on Apple TV+, but Mythic Quest is right up there with it among the best comedy series available on the streaming service. In its third season, Mythic Quest continues to be a smartly scripted series that comfortably delivers both easy laughs and deeper, more dramatic moments. In the process, it turns a relatively straightforward workplace sitcom into something even richer and more rewarding.