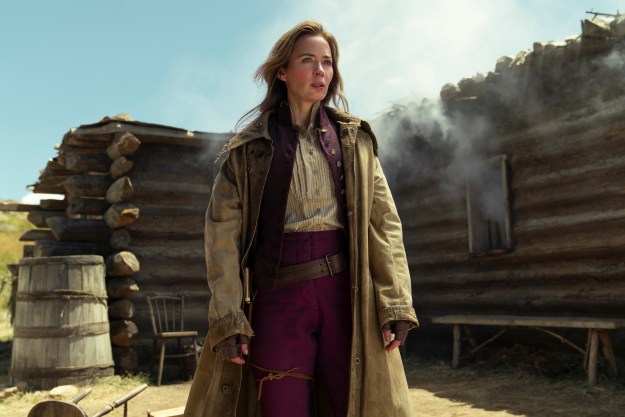 “The English is a narratively messy but consistently engaging Western that is anchored by Emily Blunt and Chaske Spencer’s spellbinding performances.”

Cornelia Locke believes in magic. For that reason, the British aristocrat, as played by Emily Blunt, feels uniquely modern in The English. The new limited series from Hugo Blick, which premieres in the U.S. today on Amazon Prime, opens with a flashforward monologue from Blunt about the power of fate. and its first episode concludes with Cornelia boasting about her star sign (she’s a Scorpio because, of course, she is) and sharing her belief in the magic of the universe. The English’s premiere also makes it clear that Cornelia is a woman on a dangerous mission, a fact that adds a surprising edge to her more eccentric astrological beliefs.

The English is at its best when it makes Cornelia’s trust in magic feel justified. Like many great Westerns, there’s a deep spirituality running throughout The English that adds layers of predetermined weight and tragedy to its story. Across its six episodes, the series frequently makes its own life harder than it needs to be by presenting a fairly straightforward plot in an unnecessarily convoluted way. However, whenever it feels like The English has grown too unwieldy for its creative team, its two stars return to keep it from floating away.

The English tells, in many ways, a simple revenge story. Its first episode introduces Blunt’s Cornelia Locke and then reveals that she, like so many Western heroes before her, has come to the American West of the 1890s looking to right a wrong as violently as she can. We’re told that she’s looking to kill the man responsible for the death of her son, though Cornelia’s actual target is a mystery that The English holds on to for as long as possible. In order to get her revenge, Cornelia requires the help of a Pawnee scout named Eli Whipp (Chaske Spencer).

When Cornelia and Eli first cross paths, the latter is just a few months into his retirement from the U.S. military, which he dutifully served for many years. The pair initially seem like they could not be any more different from each other, but the further into The English’s story we get, the more we realize just how much they actually have in common. Despite their racial, social, and cultural differences, a bond quickly forms between the two that emerges as both the thematic backbone and emotional foundation of The English’s admittedly messy story.

Fortunately, both Spencer and Blunt are performers who are more than capable of carrying a series like The English. Blunt, for her part, is given the chance to play one of her best roles in years here. The Quiet Place star brings authenticity to every side of Cornelia, whether it be her hard-edged ruthlessness, wholehearted belief in the supernatural, devastating sadness, or charming wit. It’s hard, in fact, to think of a project that has given Blunt more to do than The English, but the series is better off because it does.

Opposite her, Spencer brings a commanding presence to The English. The actor is spellbinding as Eli Whipp, a Pawnee man whose time in the military has instilled both a deep confidence and a profound sense of guilt within him. Spencer’s performance is one built on a series of micro-expressions and sideways glances that, when combined together, make Eli’s complicated past and conflicting inner emotions clear even beneath his ceaselessly calm, collected persona.

Outside of Spencer and Blunt, Rafe Spall gives an oddly entrancing performance as a character whose role in The English is probably best left unspoiled. Other recognizable actors like Toby Jones and Ciaran Hinds turn in reliably memorable performances in otherwise minor, thankless roles. Meanwhile, as its sole director, Hugo Blick fills The English with enough striking images and fittingly sun-soaked compositions to cement the series as one of the more artistically composed Westerns of recent memory.

Blick’s writing does not, however, match the consistency of his directing. The English’s final two episodes, in particular, unfold in ways that often feel confusing, if not downright incoherent. After introducing one of the more awful TV villains of the year, Blick’s final script for The English fails to deliver the kind of resoundingly cathartic conclusion that the series deserves. That particular failure is partly due to Blick’s overall misuse of a superfluous character played by A Hidden Life star Valerie Pachner.

Despite these flaws, The English is a largely successful, occasionally excellent Western. Even in its worst moments, most of which arrive in its finale, the series still feels like a unique addition to a genre that Hollywood has essentially chosen to ignore in recent years. The show is also, even more importantly, a reminder of what kind of shots actors like Blunt and Spencer can take when they’re given the tools and space that they deserve. The English, to its credit, wisely chooses more often than not to stay out of its stars’ way, which is ultimately why it works as well as it does.

The English is now streaming on Prime Video. Digital Trends was given early access to all six of its episodes.