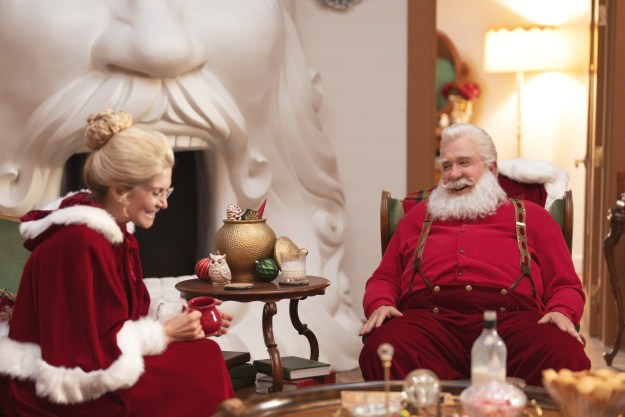 “The Santa Clauses, Disney’s revival of The Santa Clause franchise, has the potential to be a welcome gift or the TV equivalent of an old fruit cake.”

When studios refuse to let the press and critics view an entire series before writing about it, it typically doesn’t present a problem. After all, if the show is done well, the first few episodes should be enough to draw you in and give you a reliable idea of what’s to come. If it’s not worth watching, that becomes abundantly clear early on.

With Disney’s The Santa Clauses, however, the small portion of the show provided for review — just two episodes — offers more questions than answers and makes it difficult to decide whether a recommendation or a warning about the series is in order.

Set several decades after the events of the 2006 film The Santa Clause 3: The Escape Clause, the Disney+ series brings back Tim Allen as Scott Calvin, the former toy salesman who became Santa Claus. After years of serving as the sleigh-riding, gift-giving, elf-managing icon of Christmas, Scott and his wife Carol (Elizabeth Mitchell) find themselves pondering what comes after life at the North Pole when Scott begins to suspect he’s nearing the end of his term as jolly old St. Nick.

Scott’s search for a successor hits some snags, though, and he ends up wrestling with the decision about who to choose and — more importantly — whether there’s any future for Santa anyway.

For anyone familiar with the prior three films in The Santa Clause franchise, The Santa Clauses offers a similar vibe in that it continues to revel in the silliness of Santa Claus lore while attempting to earnestly opine on all the usual Christmas movie themes: the importance of family, the dangers of allowing commercialization to destroy the “spirit of the holiday,” and so forth. Over the course of three films, the franchise has leaned further into its silly side, though, and become more slapstick than saccharine, earning more negative reviews with each installment.

The Santa Clauses feels like the goofiest entry in the franchise so far, and Allen jumps back into Santa’s suit and sleigh with ease. He’s joined by Mitchell and an entertaining cast of actors playing elves, Scott’s other family members, and various figures jockeying to become the new Santa. It’s a sweetly ridiculous romp most of the time — except when it isn’t.

With the franchise returning after a 16-year hiatus, it stands to reason that it’s had plenty of time to ditch the old, recycled gags, read the room, and come up with a more modern, timely spin on what looks to be the final chapter of Allen’s Santa Claus saga. Unfortunately, the first two episodes of the series suggest that time might not have been very well spent.

Many recent, successful franchise revivals have won new and old fans over by distilling what audiences connected to in the original show or films and filtering it through a more timely lens — making it relevant in ways that feel new, but still hold the charm of what came before. The Santa Clauses does indeed feel timely, but not in the way you might expect.

Whether it’s the influence of Allen himself — who’s been outspoken about his right-wing politics — or showrunner Jack Burditt, who created Allen’s long-running, but controversial alpha-male sitcom Last Man Standing, The Santa Clauses doesn’t shy away from peppering its first two episodes with the sort of sociopolitical, “War on Christmas”-fueled jabs certain to make it a polarizing project this holiday season.

Early in the first episode, and faced with the notion that people have stopped caring about Christmas — a premise that should seem absurd to anyone who’s visited a department store lately — Allen’s Santa Claus parrots a popular right-wing talking point, lamenting, “You can’t even say ‘Merry Christmas to all’ anymore!” The rest of that episode and the show’s second episode echo that sentiment, and it doesn’t take long for this particular version of Santa Claus to feel like he’s spent too much of the Christmas offseason watching Fox News.

To suggest it strips the story of some of its charm is an understatement, but with only two episodes to go on, the series’ plans for its right-wing Santa are almost certainly going to make or break the show (possibly depending on which side of the ideological divide you fall on).

In an ideal world, The Santa Clauses will use the plight of Allen’s cranky, conservative Santa Claus to tell a story about the need for change — both within ourselves and in the way we view Christmas.

The series’ early episodes hint at the possibility of Simon, an inventor and entrepreneur played by Kal Penn, becoming the new Santa Claus. The Indian-American actor (and former member of U.S. President Barack Obama’s administration) is positioned as a prime candidate for the role in the show’s first two episodes, and the notion of Penn becoming the new face of Santa Claus feels like a bold pivot for the series to make and would offer a great juxtaposition with Allen’s Santa, who feels increasingly mired in the old ways.

The inability of Allen’s Santa to see beyond the classic imagery of the holiday even becomes an issue with Mitchell’s character — a Mrs. Claus who bristles at her portrayal in classic Christmas art and repeatedly wonders why her title doesn’t come with a first name.

Whether this is all set up for Allen’s Santa to learn the error of his ways and evolve is unknown at this point, and the possibility that The Santa Clauses could end up being nothing more than a hard-right turn for the franchise looms large over the series. It’s difficult to believe that Penn — or Disney, for that matter — would be okay with that kind of spin on the subject matter, but with Disney only offering press and critics two episodes to go on, the studio seems intent on keeping that particular secret wrapped up with a bow for the time being.

The first two episodes of The Santa Clauses premiere November 16 on the Disney+ streaming service.